Ayurveda promotes health by enlivening the body’s inner intelligence to create harmony. Ayurveda is a branch of medical science, indeed a stream of both Sastra and Science. It has provided a lot to mankind. This article is about a very deadly disease- “CANCER”. As per Ayurveda as well as Modern science, cancer is a type of tissue growth that is uncontrollable and has its own vascular supply which is why it is difficult for our body and its immune system to fight against it.

Cancer is correlated with Arbuda in Ayurveda and is considered Asadhya Vyadhi/Incurable. In Modern science, its prognosis is decided on basis of a grading system and treated either by chemotherapy, radiotherapy, or surgery. Its treatment has some other side effects also like early aging, hair loss, and gastric complaints. Yet Ayurveda cannot be a mainstream treatment of line but can act as a support to reduce complications and improve life span.

As per Ayurveda intake of a single Rasa(taste) is not healthy at all. Food that is a mixture of all Six Rasas is considered as healthy. Amount, duration, and frequency of food vary on factors like time of eating, job, digestive fire, sex, age, season, and health status. In Ayurveda literature, six major tastes are recommended in every diet – sweet, sour, salty, pungent, bitter, and astringent. Each of them possesses its own contribution to maintaining the health of individuals. tastes have specific health-giving effects. As per cancer food is medicine and cause, both for the disease. Lack of physical activity, diet, and obesity contribute to almost 30-35% of deaths due to cancer.

In Ayurveda a famous Shloka is there

This means if you take Pathya – a proper and healthy dietary intake then there will be no need to take medicine and if you do not take Pathya food then also there is no meaning to taking medicine. So a portion of good and healthy food is a blessing from God, accept it in the correct way to live longer and Healthier.

Maharishi Amrit Kalash is one such recommend product from Maharishi Ayurveda which can be very helpful to regain health. Click on the image to order 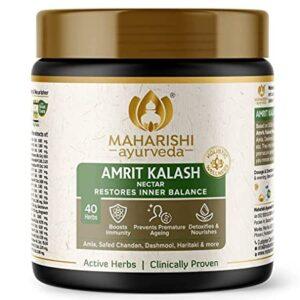